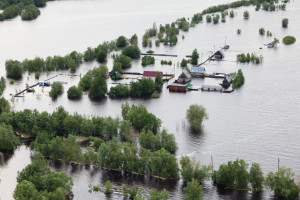 Nature is dynamic and weather patterns are constantly changing. And yet over the past half-century, humanity has become very good at predicting the weather. With technological advances, from satellites to ground radars and more – we have become a more “weather-wise” species. And yet, even as we become wiser in predicting and understanding weather patterns, we lack the same level of wisdom when it comes to taking actions to protect our planet and its weather systems. It’s gone beyond the level of simple guesswork.

A Closer Look at Floods and Flooding

By its definition, a flood is a term used o denote a large amount of water. But it also refers to the outflow of water in a fixed location. When water becomes largely uncontrollable, flooding occurs. Property damage does not need to be present for a flood to be classified as such. Furthermore, the term by itself does not denote a negative event. The melting of snow leads to flooding. Normal weather patterns include floods. Floods can be destructive to humans and the natural environment, but they also help drive biodiversity and act as an essential part of some microclimates and ecosystems.

Today, however, when people think of floods, they don’t think of melting snowpack. They think of destroyed homes and lost lives. In the modern era, floods are rarely considered a good thing. And they are getting worse. According to a study completed in Canada, in 2005 flooding damage costs were approximately $400 million. In 2013, they jumped to $6 billion. Imagine what those numbers are today.

In the United States, coastal flooding has generally increased since the 1950s. And the rate of coastal flooding is accelerating. Coastal flooding is also only one gauge of the increase in flooding around the world. The recent catastrophic flooding in Kentucky is one example. A river winding through one Kentucky town rose 18 feet within 10 hours from midnight through 10 am. Imagine waking up to that. Our hearts go out to everyone impacted by that horrible flood.

The point is: that flooding happens. And if the data is correct, they are only expected to get worse as we move through the 21st century. As records break around the world, humanity must continue to adapt and adjust how we live and recover from these events.

How Flooding Has Changed

A recent study revealed that the percentage of the global population at risk from catastrophic flooding has risen by nearly 25%. The study used satellite imagery to measure how much floods have increased since the year 2000. It shows that by 2030, millions more people will experience an increase in flooding events, with the primary causes being demographic change, climate change and migration. Researchers also said that flooding is an environmental disaster that impacts more people than any other.

In late 2021, cities in Germany and China were inundated as record rainfall overwhelmed defenses and created huge disasters. There has also been an increased risk in sub-Saharan Africa and Latin America. Unfortunately, population and infrastructure changes leave people more vulnerable than ever before.

And that’s where we come in. At Assured Software, we understand the devastating impacts natural disasters can have on the lives of people and the businesses they run. We see it every day. The damage restoration business is not one without emotion. People have lost their possessions and, in some cases, their lives. That’s why we understand how important it is to provide efficient, empathic service with as little error as possible.

Restoration companies must get the contents of the buildings they work on correct, each time. And we have developed damage restoration software for just that. For example, Assured TrackIt™, Assured PackOut™ and Assured JobCheck™ help damage restoration and insurance companies around the world complete their jobs quicker and more efficiently. Contents stay organized and we play a part in helping people rebuild. What’s not to like about that?